Be updated with the latest digital trends.

Facebook Graph Search has finally arrived that the Mark Zuckerberg-created empire dubbed as finally completing the ecosystem of what the social networking site really stands for – to answer people’s queries from “what’s going on around everyone’s life” (News Feed) to “what’s going on in their life” (Timeline).

Quick to dismiss claims that Graph Search is Facebook’s entry in the web search arena dominated by Google, Facebook’s own search tool is engineered to take a precise query and deliver answers. This means, only content that has been shared to users and content posted inside the social media site can be searched. As Zuckerberg has explained, Facebook has its own audience and their content are neither shared nor available to the public.

To recall, rumor mills last week are suggesting that Facebook might announce this week a search enginer or its mobile phone. But none of these are true after receiving this news because it seems Facebook is after all more interested in completing the three phases of the functionality that the company would like to provide the people using its site

While initially available for users in the United States, the Facebook Graph Search is something that Facebook claims will become very helpful and useful for its more than 1 billion registered members. On top of that population, there are now more than 240 billion photos and 1 trillion connections in the site’s social graph, and it’s still rapidly changing as of this writing. 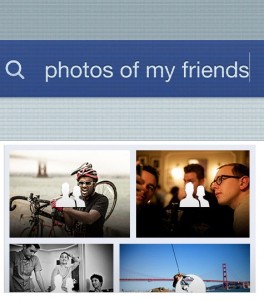 On how the Graph Search will work, Facebook indicated that the feature will appear as a bigger search bar at the top of each page. Type what you want the Graph Search to look for you and it will make suggestions of searches you’re looking to perform. Start selecting the search and Graph Search will return results on a page that allows you to further customize and filter.

The search results of Graph Search is contextual based solely on the activities of the users of the site. So if you look for name, geographic location, friends to interest, wall posts to comments and  likes, users searching inside Facebook will get a much clearer grasp of what users are interested in than say Google, which gobbles 66.7% of the market share in the traditional search. Microsoft’s Bing followed next but Google is currently blocked from accessing the social networking’s large pool of social data.

At TechCrunch Disrupt held last year, Zuckerberg already hinted at its plans to enter the search arena. He stressed: “Facebook is pretty uniquely positioned to answer the questions people have. What sushi restaurants have my friends gone to in New York in the last six months and Liked? Or which of my friends or friends of friends work at a company that I’m interested in working at because I want to talk to them about what it’s going to be like to work there? These are questions that you could potentially do at Facebook if we built out this system that you couldn’t do anywhere else. And at some point we’ll do it. We have a team working on search.”

Accoding to Zuckerberg, Graph Social will be made available slowly in other territories in the coming weeks and months. The purpose to go slow is intentional as Facebook’s latest service is being groomed to curate and index more data from the current thousands of users that it allowed to participate in its current phase.

Privacy, which will again be the template attack among privacy advocates, has been responded to by Zuckerberg with a video that he hopes will allay fears of people over Facebook’s use of their private data.

Now that Facebook has moved into social search, what do you think the opportunities this development will yield to brands and

Facebook’s move into social search provides brands and web with a massive opportunity to target new customers and engage with existing fans with their social media and web marketing strategies.

If you are an advertiser or a brand marketer, how do you plan to take advantage of the new social search from Facebook?

I will use the social search for network analysis- how the entities are linked to each other. Also it will help me in leveraging the power of influencers.

Got a digital project? Just tell us your requirements and we will get the right solution for you.

Let 7th Media bring your digital presence to the next level!